The project consisted of citations from the calendar of architect and scenographer Frederick Kiesler’s first wife Stefi Kiesler.  The calendar was made available to us by the archive of the Friedrich und Lillian Kiesler-Privatstiftung. Stefi Kiesler seems to have used it both to plan and to record her days – systematically marking events that changed after their first entry, with a strikethrough or a parenthesed “no”.

According to the scholars at the Kiesler archive, Stefi Kiesler’s calendar is one of very few sources mentioning this exhibition on magic, which apparently finally never took place.

From this starting point of the unreal, we cited a selection of entries of Stefi’s 1945 calendar chronologically on the wall of a main exhibition hall in the museum. The total number of dates corresponded to the duration of MAK’s Life Visions.

The series of dates formed an independent thread through the exhibition of Frederick Kiesler’s vast archive of architectural models, sketches and drawings, while the entries also referred to a large number of artists and acquaintances of the Kiesler couple appearing in other parts of the exhibition. 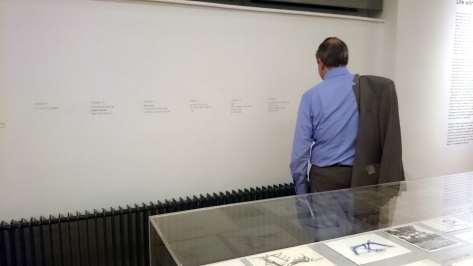 The calendar entries were also communicated dynamically, a new entry each day in the exhibition period, by a Stefi Kiesler profile established on Twitter.

Many of the entries in the calendar are short, but when read in the context they were presented, they stood out as snapshots of the everyday, revealing a professional and social network. They also communicated a substantial contribution from Stefi Kiesler to her husband’s career by her writing, translating, networking and organising, even contributing financially through her permanent position as a librarian at the New York Public Library.

For many years, Stefi Kiesler worked on a book featuring examples of how dreams are described in literature. The book remained unfinished. Together with her habit of taking on many different aliases and variants of her name – such as Stefi, Stefanie and the pseudonym Pietro de Saga, this draws an interesting image of a curious, hard working woman.